Roy Keane was castigated from certain spheres last night on the back of his comments regarding Nani’s sending off. In fact, Keane had every right to say what he said, despite his litany of problems with discipline over the years (and I’m certainly not forgiving him for that). For those who won’t accept his view because of his problems, I’ve never gone out onto a pitch to purposefully injure another professional footballer (being neither a butcher nor a professional footballer), so I’m allowed to say it – it certainly wasn’t ‘wrong’ to send Nani off yesterday.

Remember the reaction to Nigel De Jong’s tackle in the 2010 World Cup final? A kick to the chest was criticised from all segments, but last night’s tackle wasn’t. There’s been a number of excuses, such as Nani not realising there was a player behind him, to it being considered a genuine attempt to get the ball. But you’d have to argue that any number of sendings off a season are not ‘intentional’ – it would be ridiculous to suggest the intent of Ryan Shawcross was to break Aaron Ramsey’s leg, but it is the consequence that matters in refereeing, not the intention, except where moments of violence are concerned (obviously if someone intends to punch someone but misses it is still a huge incident).

The reality is that Luis Nani kicked his opponent in the chest, planting his studs square on his upper body. We send people off for studs on a leg, never mind higher up, so surely the punishment should be the same? It is similarly punished in Europe as a general rule, so Nani should not have been surprised. A logical man would not go around taking risks like Nani did yesterday.

As an aside, ITV’s reaction was pathetic and symbolised much of what is wrong with modern football coverage – there’s an inherent bias afforded to certain teams. Analysis should be taken without emotion, and it wasn’t done so, which is awful as it affects public opinion incorrectly. It was not a travesty like they tried to suggest. It was a decision that could have been either a yellow or a red, and Cuneyt Cakir pulled out a red. Simple as. 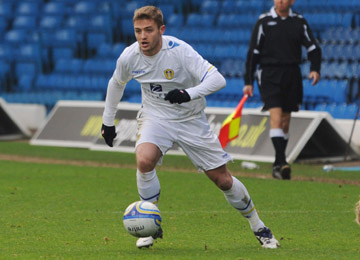 Ahead of their contracted final game for Leeds (against Hull City), we are reviewing the contribution of the loanees to the ups and downs of Leeds United thus far this season:

Michael Tonge: Arguably the most important of the loan signings we have made this season, Tonge has been an important creative force in the center of a midfield that lacked one when the season began. Derided when shoved out to the left hand side of midfield, where he was lost and ineffective, Tonge was, with the arrival of fellow loanee Jerome Thomas, able to move back into the center, where he has since proven his effectiveness. Able to pinpoint a pass, something his fellow midfielders often seem entirely unable to do, Tonge could be seen as key to the upturn in form since Thomas’s arrival. Has also scored some useful goals in the context of the season. Must admit, got this one completely wrong at first. Whilst he has already gone back to his parent club, Tonge has no future at Stoke and will almost certainly be signed permanently in January. Done a good job, would not blame Warnock for signing him – 6/9.

Jerome Thomas: As much as we thought he was after Crystal Palace, sadly Jerome Thomas is not Max Gradel. Flatters to deceive at times, but with a run in the side and a lack of injuries could turn out to be a really good player at this level. Time is not on his side though, with only one game left to run on his initial loan. If I were speaking to him one-on-one, I would recommend attempting to manoeuvre a permanent transfer, as he is likely a step below what is required at the upper end of the Premier League (which, it must be remembered, is where West Brom are plying their trade this year). Whilst he has seemed ‘off’ in many games, the statistics do not lie: played 7, won 5; two assists and a goal. Sign him up – 12/14.

Alan Tate: The last two games have been unkind to Tate in my eyes – where Pearce would likely have battled and scared Middlesbrough’s hulking striker, Tate allowed himself to be trampled. Looked calm and assured in the first few games of his loan however, and it may just be a blip. At the very least, we certainly need a third center back of some quality – Paddy Kisnorbo proved last year that he cannot and should not come into contention for first team football at any point this season, and word on the streets suggests Leigh Bromby would be lucky to walk properly ever again, never mind play football. Disappointed recently, but can still go on to make himself a solid feature in the rest of the season, should he be signed – 1.7/3.

Not mentioned: Ryan Hall (already signed permanently for a reported £150,000). Hall, 24, has been pointed to as a player of ‘potential’ by Warnock, which makes sense, given that Warnock seems to consider players to be in their peak well into their thirties.

Ultimately, the loanees have been imperative to some of our successes and have generally avoided being tarred with the brush of our failures. All three deserve signing, whether permanently or until the end of the season. They will certainly provide more to Leeds in the second half of the season than the likes of Varney, Connolly, Gray etc.