Leeds United have reportedly agreed a deal with former Manchester City and Arsenal goalkeeper Stuart Taylor, bringing him to Elland Road on a one-year deal.

Leeds have agreed a deal to sign former Reading and Arsenal goalkeeper Stuart Taylor on a one-year deal . #lufc #mot

The move comes with current first choice Paddy Kenny left in England as the rest of Leeds’s squad undergo pre-season training in Sardinia. Kenny has reportedly been told that he can find another club, although he is set to take time to make a decision over his future.

Taylor has only made 72 appearances over the last ten years, and is primarily a backup goalkeeper at every club that signs him.

Leeds were under a transfer embargo until yesterday, with no official confirmation that it has been lifted. It seems as though they are keen to tie up deals.

Taylor was pictured in the background of a photograph from Leeds’s Italian training camp, with speculation on social media over the identity of the player. 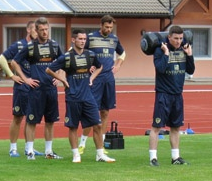 This is the second time in recent days that a potential signing was pictured at a club event, with trialist Andre Blackman photographed at the club store on the day of the new kit launch.

Leeds are set to lose captain Ross McCormack to Fulham, with the striker having recently handed in a transfer request.