Former Leeds United captain Ross McCormack has sent out a message to the club’s fans, telling them that he will be back at Elland Road in the future.
McCormack departed Leeds for Fulham in the summer, joining the London club for a staggering £11 million.
While his time with Fulham has not been a complete success, the Scotland international did captain his new team at Leeds’ ground on Saturday as they won 1-0 against his former side.
Leeds struggled to impress against their recently relegated opposition, and carved out very few chances.
This has put Leeds in a precarious position.
They sit 19th in the Championship, and could be dragged into a relegation battle if they do not improve their form over the Christmas break.
McCormack did, however, give Leeds fans a boost at the weekend, speaking to the Yorkshire Post after the game and suggesting that he would return to Leeds in the future.
Asked about the jeers he received on Saturday, McCormack said: “It didn’t hurt. I expected it for the way I left. The way I left wasn’t the best.

“It would have been nice to come back and for it be like old times but that was never going to happen. It’s sad because personally I had a good season last season but that’s the way it was going to be. At the end I walked around and applauded the fans and the vast majority were great.

“I happened to be the one who someone came in and paid big money for and let’s be honest, you can’t turn that down. I can’t and the club can’t. That’s football. But even after the way I left, the club still means a lot to me. They gave me a chance when it wasn’t happening for me at Cardiff. It’s a special place and as I said when I left, I’ll always be a fan.

“Whether as a player you never know but definitely later on in life, I’ll be back.”

Former Leeds United star Ross McCormack is set to captain Fulham in the game against his former club today.

McCormack departed Elland Road for a huge £11 million transfer fee in the summer, with debates over whether the player himself pushed for a move or whether he was forced out by owner Massimo Cellino still raging among the Leeds fan base.

The Scotland international was captain of Leeds for the second half of last season, and rewarded former manager Brian McDermott for his faith in him by scoring 29 goals over the course of the season.

McCormack did not, however, seem particularly keen to stay after McDermott’s sacking and the appointment of Dave Hockaday, who lasted six games as Leeds manager.

He will now captain his new side against his old, and it will be interesting to see what sort of reception he receives from fans who, only six months ago, lauded him as a hero. 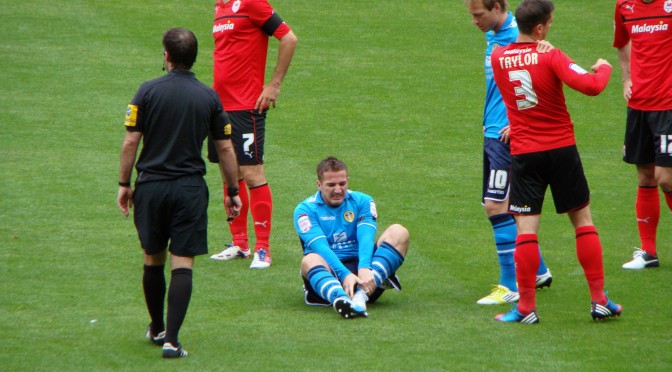 Saturday sees the first game between Leeds United and Fulham since 2004, when the Whites were relegated from the Premier League.

The tie at Elland Road may be Fulham’s return to the ground after a ten year absence, but it also features the return of former Leeds skipper Ross McCormack.

Fulham did a considerable amount of business with Leeds in the summer, signing a 40 goal strike partnership for a combined total of around £12 million, with McCormack moving for £11 million.

While Matt Smith floundered after joining the London side, ultimately moving back to League One on loan, McCormack is slowly asserting himself since the departure of Felix Magath.

However, things are still not hunky dory for Kit Symons’ side.

While they sit only a point behind Leeds in the table, in 18th, they suffered a humiliating 5-0 loss against Watford last week at Craven Cottage.

McCormack has not yet hit his true heights, but Leeds fans know there are reasons to fear him against their questionable defence.

Here are some of the reasons why:

1. He’s still an exceptional goalscorer, when given a chance – he scored 29 goals last season for the Elland Road side.

2. McCormack is at his most dangerous when he feels he has been wronged. Huddersfield felt his ire last year when their fans claimed he didn’t want to play – the outcome was a hat trick in a 5-1 win. He consistently scored in high pressure, high tempered derby matches last season too.

Leeds fans will do well not to give him a reason to play at his peak.

3. He’s provided seven assists this season. A striker like Hugo Rodallega, with eight goals this campaign, could benefit from his service against the Whites.