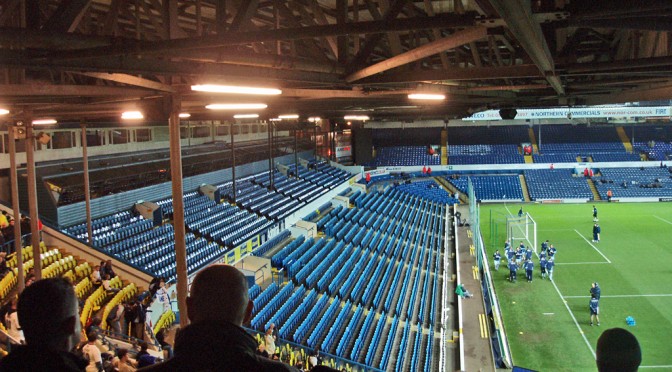 In the summer, someone on Twitter told me that my parents should have killed me shortly after I was born.

This was, to clarify, in response to me suggesting that it might be good if we went a goal behind in our first pre-season friendly against Guiseley, a game I ultimately attended.

Looking at the squad before that game, it was clear that the situation wasn’t good. We had sold Ross McCormack, comfortably our best player the year before, and not really replaced him. The arrival of Souleymane Doukara meant that we had a strikeforce in which Steve Morison and Noel Hunt were expected to play key roles.

In going behind against Guiseley, I was hoping that it would deal a shock to Massimo Cellino, who stood by the side of the pitch smoking, shaking hands with fan after fan.

By this point, he’d appointed Dave Hockaday as manager, and the situation was looking increasingly dire. I spent most of the first half, which was goalless and offered little hope, discussing with Moscowhite of The Square Ball and The City Talking that we were probably going to end up in a relegation battle.

Moscow wrote a great article about control at Leeds United today for The City Talking, and that is what inspired me to think more about Cellino.

It was not Guiseley (2-0 win) that dealt Cellino the shock I was hoping for, but Millwall away, a 2-0 loss. Between that game and the transfer deadline, we sacked Hockaday and we signed player after player, with first team regulars like Mirco Antenucci and Guiseppe Bellusci joining Leeds.

Why did he require that shock? As you stood at the side of the pitch at Guiseley, you could see that it wasn’t working – that Hockaday was out of his depth, that we had no dynamism, that no one could craft, create, imagine, build, basically do anything.

Yet Cellino stuck with his man and his squad going into the start of the season, and even then you knew trouble was afoot. We won against Middlesbrough against the best efforts of our first team. We got destroyed away at Watford, a game in which we looked less likely to have a genuine chance than a stable football club.

Since then, results have been up and down, mostly down. We’ve had a succession of managers with only Neil Redfearn’s side approaching impressive displays. We’ve had young players come to the fore but show their inexperience at crucial points. We’ve had undroppables get game after game.

We’ve also had our owner banned, pending appeal. It’s Cellino that comes into question here, and his control.

Cellino is clearly the captain of the ship, but it’s almost as if he chooses to remove the wheel for extended periods of time. It would be unfair to say he has no plan, but the plan seems to be scribbled down on the back of a serviette that was cleared away by a waiter at the end of the meal.

We’re buying Elland Road, we’re not buying Elland Road. Our squad, including ‘beautiful man’ Noel Hunt, is good, our squad isn’t good. We’ve planned for January, we haven’t, here are the six players we’re buying, we have an embargo, let’s buy them anyway. Where’s the consistency, the direction? It’s taken us weeks to hire an assistant manager for Redfearn, even though his preferred number two was given away for free by Huddersfield.

At this point, is Cellino just doing more damage than good? He’s a man who claims to have the best interests of Leeds United at heart, but is this inability to have a plan before he needs to (a week before the transfer deadline, for example) hindering our progress. I like Guiseppe Bellusci, accusations of racism aside, but you’d struggle to find a Leeds fan who believes he is worth the reported £1.6 million fee we paid Catania for him, a deal pushed through to ensure that we could bring more players in on loan ahead of the impending transfer embargo. Did we really get value for money?

The one true positive of Cellino’s reign has been Nicola Salerno’s eye for a player, with our signings generally working out this summer. By the same token, however, it would be impossible to justify Ken Bates’ time at Leeds by the fact that Gwyn Williams brought in Max Gradel and Luciano Becchio.

Heading into January, our squad clearly needs improvement. What would a player see ahead of them if they chose to sign for Leeds? A team in 19th, one who could find themselves without an owner until March. The relegation battle I feared is coming true, and if we want to avoid it, Massimo Cellino might have to look at himself and hand over more control to recently appointed COO Matt Child than he ever thought possible.

At this point, it might be time for the football men to run the football club. Salerno clearly gets the game in the same way that Redfearn does, and in tandem they could probably get the right players in in January to push Redfearn’s youthful side up the table, if the line of communication is between them without Cellino occasionally popping in and shouting: “hey, what about another midfielder?”

A captain-less ship with Redfearn exerting more influence might work better than one with a captain with no plan who is banned from steering it until March of next year.

2 thoughts on “Is Cellino Doing More Harm Than Good At Leeds United?”