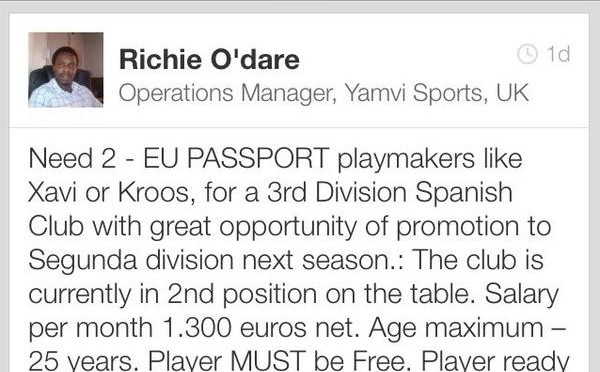 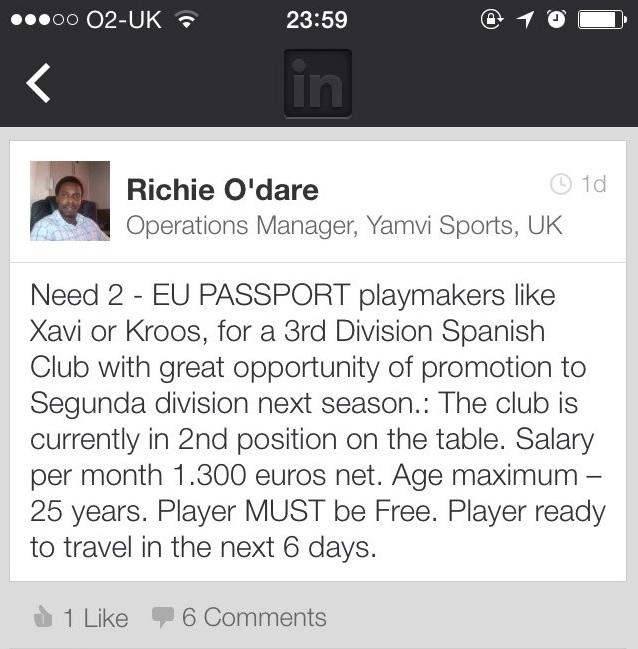 Their demands are specific, looking for players with a European passport who play as playmakers.

While they are hoping to get a player like Barcelona’s Xavi or former Manchester United target Toni Kroos, it seems unlikely that they will be able to tempt a player of that calibre with an offer of €1,300 a month.

There also cannot be a transfer fee involved, and the talent has to be younger than 25 years old.

The club are desperate for the two new players, and need them to be able to join them in the next six days.

Real Madrid midfielder Toni Kroos has admitted that he is glad he turned down a move to Manchester United in favour of joining the Spanish giants in the summer.

Kroos won the World Cup with Germany in the summer and could have started the campaign with Man Utd, having agreed a deal to move there while David Moyes was in charge.

However, a change in management there caused a reassessment of the situation, and Real revealed their interest in the former Bayern Munich man.

Kroos chose to move to the Champions League winners for £20 million rather than joining the Premier League side.

Since then, things have been on the up for Kroos.

Having won the World Cup with his country in the summer, Kroos aided Real in their Club World Cup victory just last week.

He has spoken to the press since, declaring that he is convinced he made the right decision in the summer.

Kroos said: “I’m so happy to win the Club World Cup for a second time. This trophy is so good for Real Madrid, we are a great family.

“I chose Real Madrid and now I’m so happy. I was right to sign for Madrid.

“Before coming here, I didn’t know what to expect, but I made the decision.

“I was looking for something new and I was lucky that I signed for Real Madrid.”

Manchester United had reportedly agreed a deal to sign Toni Kroos this summer, but the sacking of David Moyes and subsequent appointment of Louis van Gaal seemingly caused the German international to make a dramatic U-turn on his future.

The 24 year old midfield maestro had given his consent to a transfer to Old Trafford prior to this summer’s World Cup in Brazil.

Been told from very good sources that Toni Kroos agreed to join Man UTD. But after Moyes out – Van Gaal in: Kroos said no

With his contract expiring at the end of the current season, Bayern Munich were forced to sell Kroos to Real for a cut-price £20 million, despite seeing their star play a key role as Germany won the World Cup.

Van Gaal has strengthened the midfield with Ander Herrera and Daley Blind, but Man Utd fans will surely be wondering what might have been.