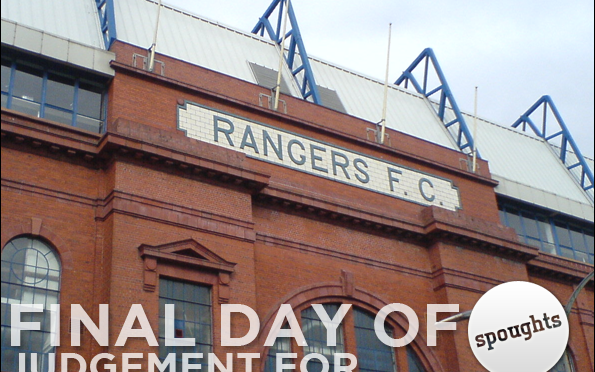 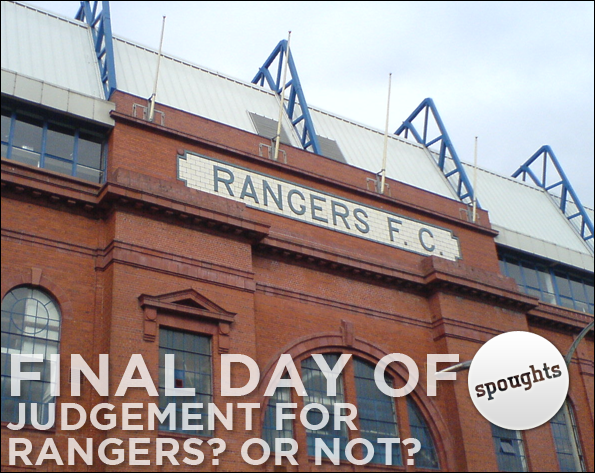 Constantly spouted out over the past five months in the world of Scottish football have been the buzzwords of sporting integrity, fairness and pride.  Ever since Glasgow Rangers FC descended into administration on the 14th February 2012, there have been many so-called ‘decisive’ days for my beloved club. Liquidation came and went, and theoretically stripped us of all our history; then came the SPL’s decision to refuse to let Rangers Newco back into their lair of wholesome integrity, and now, as I write this today, twenty-five out of thirty SFL clubs have voted for Rangers to play in the Irn Bru Scottish Division Three as of the beginning of the 2012/2013 season. It seems the shibboleths of sporting justice have finally conquered and we can now continue with what it’s all about, and just play football. But is it really over?

Unfortunately, I fear that our final fate has still not been heard. The exhortations of integrity that have been the baseline for so many representatives of Scottish football are no doubt going to be proven to be shallow as they appear, since commercial and financial interests are beginning to take the forefront as murmurings of an SPL 2  are already taking place. In their mission to really stick the boot into Rangers, many have not thought of the consequences of ridding the SPL of one of its major segments. The projection of sixteen million pounds being lost from the game as the result of today’s expected decision has now been dismissed as scaremongering from SPL and SFA executives, yet it cannot be argued against that this condemnation for Rangers will drastically shrink the commercial appeal and economy of Scottish football.  The disadvantageous repercussions will be endless.  Sky will surely pull the plug on their broadcasting deal with Scottish football once the current contract comes to an end, as their deal relied upon the continuation of Old Firm derbies. Celtic fans, although they do not foresee it, will grow tired of constant taunting and jibing, as the realisation of not having their ‘significant other’ in the same league as them for at least three years, will soon sink in. The Old Firm derby has become known as one of the greatest and fiercest derbies in the world, and, to be brutally honest, was the only appeal of Scottish football for fans outside of the SPL. The absence of a regular Old Firm fixture will be the biggest commercial and historic drain from the SPL, but that is an implication the SPL will have to live with since they ruled out a Rangers Newco entry into their league.

Truth is, the SPL were relying upon the submission of the SFL into placing Rangers into Division One, as then the double aims of upholding their slogans of integrity and fairness, whilst minimising financial implications, could be achieved. However, the bullying and scaremongering have not resulted in the desired effect, leaving the positions of such executives as Stewart Regan as untenable. Stepping down from his role as SFA chief executive would be the honourable thing to do, yet I suspect Regan will stay on and try to manipulate proceedings so that a house for Rangers will emerge that will facilitate financial motives, rather than the wishes of the thirty SFL clubs, and indeed of the Rangers manager and fans. It has been a pivotal day, but not for the right reasons. Instead of this being a new start to a great adventure for Rangers Football Club, it is the onset of a new rollercoaster of machinations that will see Rangers’ future being thrown to and fro in order to appease the greedy financial needs of men at the top. I can only hope they do not get their way, and that Scottish football returns to satisfying the majority, not the suited and executive minority.