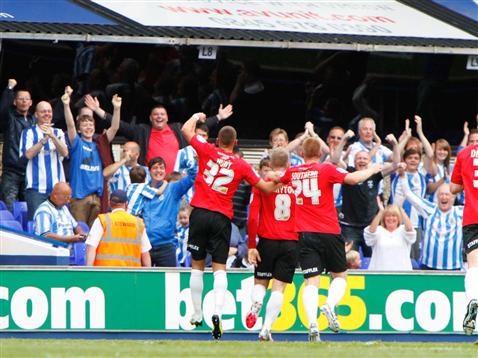 After 11 years away from English football’s second tier, Huddersfield’s first month back in the Championship was always going to be interesting. Despite an underwhelming pre-season and the eventual sale of star striker Jordan Rhodes, Town have enjoyed an encouraging and entertaining start to life in the Championship. Here we attempt to outline some of our thoughts on Town’s fledgling season so far and what it means for the rest of the 2012/13 season.

Too often in recent years Town have been stuck in a rigid one-dimensional system with no ‘Plan B’. In the past if things weren’t going Town’s way, the team would often be sucked into knocking aimless long balls up field towards the strikers. Simon Grayson, however, has shown a refreshing flexibility in his tactics and a willingness to change games when things aren’t going Town’s way. So far this season Grayson has already used three different formations to good effect. Away from home Grayson has adopted a 4-5-1, which has allowed for fluent, counter-attacking football, as shown so impressively at Cardiff, and is a far cry from the 4-5-1 implemented by his predecessor. At Cardiff a central midfield three of Keith Southern, Adam Clayton and Oliver Norwood were able to effectively stifle Cardiff’s midfield but at the same time provide the forwards with service.

4-5-1 may well be the formation Town set up with on a regular basis away from home, however, in home games it seems that Grayson prefers a more orthodox 4-4-2 formation. How Grayson will fit Adam Hammill, Sean Scannel, James Vaughan and potentially another striker into the team remains to be seen, but it should lead to entertaining football at the John Smith’s Stadium this season. What is more, the signings Grayson has made give him real options off the bench to change, not just the personnel, but also the formation and style of play. For instance when Town have struggled, such as against Forest at home, Grayson didn’t just make like for like changes but instead switched to a style of play which brought Town back into the game. Bringing on an extra centre back gave Jack Hunt extra license to attack down the right hand side and this was the primary reason that Town were eventually able to earn an unlikely point.

After a protracted transfer saga Jordan Rhodes finally departed for Blackburn at the end of August in a deal worth at least £8 million to Town. As far as the transfer itself went, Dean Hoyle and Town would have been foolish to reject such a large fee for a player who was relatively unproven at any level above League One and – crucially – wanted to leave. Though James Vaughan has shown signs of real quality since arriving on loan from Norwich and should only get better as he gets more game time, question marks over his long-term fitness and the fact that Lee Novak and Jimmy Spencer are unknown entities at this level, mean that Town will probably require another striker in the loan window if they are to really push on this season.

It remains to be seen if a loan deal for Jermaine Beckford, or indeed any other striker, can be done. Despite his Leeds connections and the fact his career has somewhat stagnated in the last couple of seasons, Beckford would be a quality addition offering pace, strength and most importantly goals. Significantly, in Simon Grayson, Town have a manager who has previously got the best out of Beckford. Town currently have a squad with enough quality to keep its head above water this season, but bringing in a proven goalscorer at this level could make the difference between a top half finish and a finish in the bottom 8. 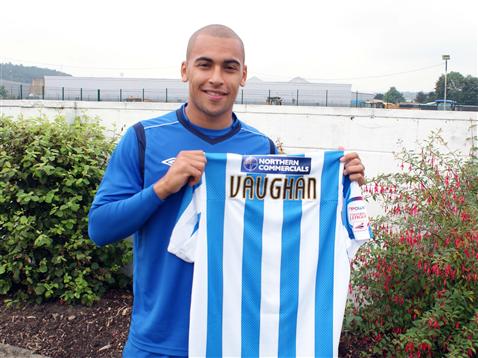 Before the season started questions were asked as to whether any of last season’s squad would be able to make the step up to the Championship.

Despite being something of a Huddersfield Town legend and excellent for much of his Town career, there were doubts as to whether Peter Clarke would be able to perform in the Championship. Though Clarke is not the quickest or most comfortable on the ball he has started the season in good form and his partnership with Joel Lynch looks promising. Clarke’s form has undoubtedly been helped by the fact he has a settled and capable midfield in front of him, which will leave both Clarke and the entire defence less exposed. Furthermore, as his partnership with Sean Morrison last season proved, Clarke raises his game when playing with another quality centre-back alongside him, and, in Joel Lynch, Clarke has a partner who has shown real class and ability since arriving from Nottingham Forest.

Though Jordan Rhodes was unquestionably Town’s stand out performer last season, the hugely exciting Jack Hunt was in many people’s eyes the second best player in the squad. Lightning quick, skilful and a player who creates chances for team mates with his runs from deep; Hunt has the potential to become a top quality full-back. Though he is not yet the finished article, Hunt has made an encouraging start to life in the Championship. Hunt’s ability going forward has never been in question and due to his attacking prowess there was even talk of converting Hunt into an out and out winger, however, this would limit  his effectiveness as he is at his best running at defenders with pace from deep. If Hunt’s attacking play was not in question, the same could not be said about the defensive side of his game. Admittedly Hunt can still, at times, be somewhat naïve and occasionally caught out of position, but it is easy to forget just how far Hunt has come in the last two seasons. His performance against Craig Bellamy, one of the very best players in the league, in the opening game of the season proved that Hunt’s defending is good enough for the Championship and the more he plays at this level, the more he will continue to learn and grow as a footballer. Though some of the current squad will find the Championship a step too far, it is good to see some of the players, who excelled in League One, take their chance at a higher level.

In recent seasons Town’s midfield has been, at times, virtually non-existent. Despite a huge influx of central midfielders every year since 2008 – from Jim Goodwin to Tommy Miller – only Damien Johnson really came close to good enough. This summer, however, Grayson has brought in Adam Clayton, Oliver Norwood and Keith Southern and so far its all looked extremely promising.

There must be a greater emphasis on goals from midfield this season and Town simply cannot rely on a striker scoring so many goals this time around – Jordan Rhodes scored almost half of all Town’s league goals last season. Fortunately in Oliver Norwood and Adam Clayton, Town seemingly have players who will contribute goals from midfield. Norwood has been one of Town’s stand out players in the first few games of the season and though it is still early days, Norwood looks every inch a player who was brought up by Manchester United. Comfortable on the ball and a great passer, Norwood is one of the most technically gifted players Town have had in a long time. His ability to switch play and the protection he should get from the hard-working Keith Southern means that Norwood will almost certainly be one of Town’s most influential players this time around.

Though the season is still young, Town’s midfield already looks much better than it has at any point in recent years. Despite this, it is worth pointing out that Norwood and Clayton are both still young players and relatively inexperienced at this level. Though they undoubtedly have the potential to be great players, it would not be surprising if they struggle at times this season as it is incredibly hard for any player to maintain form for a full season let alone young players in the early stages of their career. Additionally, both Clayton and Southern are prone to picking up bookings and it should not be a shock if they are suspended for a number of games this season. Nevertheless, this season’s midfield is a source of great optimism and, given time, could be one of the most successful in recent history. 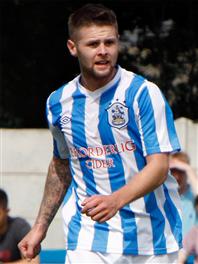 Though Town eventually won promotion last season, the football was often incredibly dour as Town inevitably scraped to victory or contrived to draw games they really should have won. If the first few games of the season are anything to go by then Town fans will be getting much better value for money this time around. Somewhat perversely, going to games may be more enjoyable this year even though Town will probably lose more games than last season. This was evident in the game against Nottingham Forest. Town were outclassed for much of the game but the quality of football on display meant that it was at least an entertaining game to watch. Players of international calibre and Premier League experience will regularly be on show at the newly named John Smiths Stadium and this can only be a good thing. What is more, Simon Grayson will invariably send his teams out to win games, which should see Town fans going home satisfied with the entertainment on display if not the overall result.

The monumental pressure that has been on Town for at least the last two seasons has been lifted and that should be evident in the performances this season. The players should be able to play with a freedom and without a fear of losing. In Simon Grayson, Town have a manager who sends his teams out to try and win football matches and his calm demeanour at the start of this season has won over many of the doubters. Though, realistically, Town probably cannot achieve a place in the top six, a talented, young squad and a calm and composed manager means that if Town continue how they have started this season, then they should be able to achieve a comfortable mid-table finish, which, in all honesty, should be deemed a successful season.