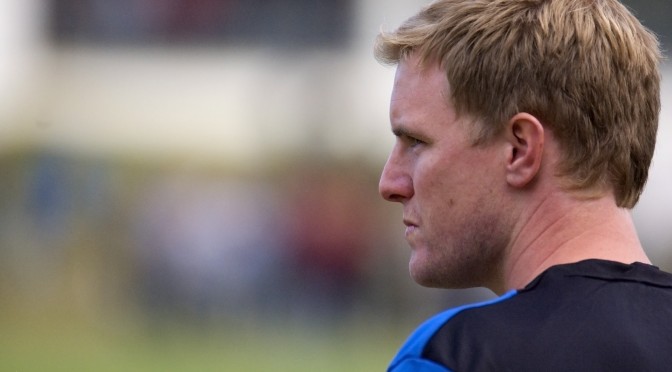 Eddie Howe led Bournemouth to the Premier League by finishing first in the Championship.

The Championship season has finished, with Bournemouth and Watford the two sides confirmed to have earned promotion to the Premier League.

Middlesbrough and Norwich City are going to face off at the national stadium, Wembley, on Monday, in the play-off final, with the winner being promoted to the top flight. Middlesbrough had their names misspelled on the tickets for the final.

However, how do the top sides rank when compared to other teams in the division in terms of attendance? The chart below shows which the best attended grounds in the second tier are. A chart of The Championship’s average attendances

Surprisingly, Bournemouth, one of the two teams to have gained automatic promotion, actually had the second lowest average attendance this season, at 10,265. They were above only Rotherham United in the overall table.

Brentford, another of the division’s high fliers, who have been rejigging the structure of their club, were third from bottom, with an average attendance of 10,265.

The best attended team in the Championship, on average, were Derby County, who dropped out of the play-offs on the last day of the season in dramatic circumstances.

Norwich City striker Luciano Becchio is desperate to move back to the club that he considers to be his home, according to his agent, as reported by the Yorkshire Evening Post.

Becchio moved to Norwich almost two years ago, after the Whites agreed a deadline day deal which saw them swap him for Steve Morison.

Both players have struggled at the clubs they moved to, and now Becchio is keen to return to Elland Road in the January transfer window.

Becchio was reported by the Yorkshire Evening Post to be one of Neil Redfearn’s preferred signings this month, and despite the transfer embargo plaguing the club, Becchio is a realistic target.

The Yorkshire club can only sign players on a temporary basis, and the Argentinian striker would undoubtedly be willing to drop his wage demands to secure a switch back to Leeds.

Having returned to Norwich early due to injury after a loan spell at Rotherham, Becchio is now thought to be fully fit.

His agent, Horacio Rossi told Press Association Sport: “Leeds is Luciano’s home and if they want to sign him they know where we are.

“Leeds is always going to be a special club for Luciano. It’s a club that he loves.

“If they want to sign him they know where we are.”

That must rank as the quickest formal confirmation I’ve had to a piece of info I’ve been given. Expect Phelan to take over from Adams #ncfc

Neil Adams, who was in charge of Norwich, resigned only moments ago, but it has become common knowledge among journalists that Phelan is expected to take over, having joined the club as a first team coach earlier this season.

He has already taken temporary charge of the first team, but a permanent confirmation is expected in the near future.

His arrival never boded particularly well for Adams, who was himself promoted from within by the Canaries, but oversaw a relegation and a questionable start to the season in the Championship.

He was also previously assistant manager at the club between 1995 and 1996.

Phelan was Alex Ferguson’s last assistant at Old Trafford, in that role between 2008 and 2013.

He now looks set to start his first ever role as a manager at Norwich, at the age of 52.