It sounds bizarre saying this about one of the world’s richest football clubs, but it is true that Manchester City’s generally disappointing performance this season can be credited to their stuttering efforts in the transfer window last summer.

Look at what their targets were and what they actually achieved: Daniele De Rossi was clearly Mancini’s number one desire, what with his ability to play in midfield or defence, ideal for Mancini’s summertime wish to have a shifting system in-play. Mancini has attempted to play a 3-man defence, but De Rossi’s cheaper, less good, alternative Javi Garcia hasn’t impressed particularly in midfield or defence, and City have struggled whenever they’ve attempted to play three defenders.

Aside from this, Maicon felt a bizarre signing, not an improvement on either first choice right-back Zabaleta nor Micah Richards, who has been on the sidelines for much of the season. Scott Sinclair simply hasn’t appeared much (if at all) for them, as many predicted. The signing of Jack Rodwell was called into question not only by City fans, but also fans of Everton, who felt they had come out very well from the deal. Nastasic is possibly the only summer signing to have made a palpable impact.

Mancini today levelled the blame at the feet of Brian Marwood, formerly responsible for transfer dealings. The two had been clearly fighting since the summer, if not before, and the summer’s awful dealings was likely the result of political plays from Marwood. Possibly hoping to weaken Mancini by providing him with players he did not ask for, it has instead given Mancini an obvious excuse for a weak season, and probably explains why the City fans have not turned, even if second place should be considered a decent position, given the years of torment City fans have suffered before recent successes.

The biggest mistake, it must be said, was missing out on Robin Van Persie. It sounds obvious saying it, but City should not have passed up the opportunity to sign him for £20 million. The number of goals he has provided should not be so easily available for that price. This summer they need to recruit a top goalscorer, and you imagine they will, with Falcao and Cavani seemingly outgrowing their current clubs. 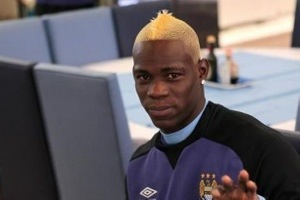 As Daniel Taylor at The Guardian has reported today, Manchester City have internally come to the decision that Mario Balotelli’s tenure at the club is over, even as Mancini continually denies this publicly. The intention, by denying that he is for sale, is to recoup as significant a proportion of the sum City paid for the Italian as possible, given the reticence of most clubs to sign a player who has flattered to deceive, at best, during his time in Manchester. City hope to get as much back as possible of the £24 million they spent on the striker.

However, where the belief is that Balotelli has disappointed at City, I remain convinced that the club has repeatedly failed him, putting him in a series of impossible positions from which it has been incredible difficult to progress and maintain a role in the first team.

Balotelli is a striker, and, at that, the main one. Not only is he physically built for that role, with the power and strength required to operate alone in a forward position, but his game is built around that. He is best with the goal at his wake, not trying to build goals for others. Yet time and again, Mancini has chosen to field Balotelli off another striker, or most oddly, in a role on the wings. It is baffling, and the sort of decision making that happens time and again in football, especially in this country, where managers and coaches refuse to trust youngsters with a central striking role. It is disappointing that Mancini does not inherently understand the difference between the two roles and the ability required, despite the fact that he himself played up front.

Whenever he has been given an extended opportunity there, Balotelli has impressed. People were quick to forget his run in the first team last year when Tevez disappeared and Dzeko was woeful, when Balotelli kept City in the title race over a difficult winter. Similarly, his performances for Italy in the summer are often pointed to as an example of his disappointing form at City – how can they be compared when, this season, he has rarely been the ‘main man’.

Even when he has been given a chance up top, it has come almost begrudgingly from Mancini. This is another issue with the idea that Mancini supports Balotelli above all others and gives him chance after chance. Psychologically it cannot be good for Balotelli that it always comes unwillingly. There is always a feeling that he has only been put on the pitch to make a mistake, and when that mistake comes, he is taken off immediately. Think of the derby at the Etihad earlier this season, he started, but there was a palpable sense that he was there to ruin his career, so Mancini could wash his hands of him. The supposed support provided to him has never come.

Balotelli plays with the youthful exuberance that the best players in the world do, but there is no hiding away like Barcelona do with Messi. I am not claiming they are of the same standard, but Manchester City have not done much to protect him over the years. He is eternally in the public eye. All of this points to how, as much as Balotelli has made errors in his time at City, City have made errors with ‘Super Mario’. The feeling I have is that he will be sold and go on to craft a really good career elsewhere, probably in his native Italy. He may come to be seen, ten years from now, as a lost asset to the Premier League.