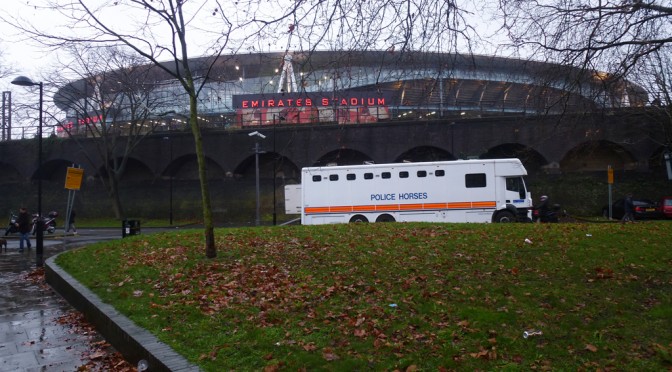 A Freedom of Information request to the police found that managing games for the 2013-14 season hit the public purse to the tune of £985,660.

Further data has shown that fixtures against local rival Tottenham Hotspur have been the most expensive matches to control for the last two seasons running.

The game between the two sides on 27 September 2014 cost the police an astonishing £77,000. More than 300 police were deployed for the game.

However, the police had managed to make some savings compared to last season’s derby. The data showed that the match between the two clubs on 4 January 2014 was the most expensive game to police over the last two seasons, costing £79,386. Last season, it was followed in cost by the Champions League game against Borussia Dortmund and the Premier League tie against Everton. Surprisingly, Arsenal’s Champions League clash against Turkish club Galatasaray, which was marred by crowd trouble and violence, was cheaper to police, costing only £58,000.

Prior to the match fans set off flares in the Finsbury Park area and close to the Tollington Arms pub.

During the match Galatasaray players Wesley Sneijder and Fernando Muslera were forced to ask their own fans to stop throwing flares onto the pitch as it was disrupting play.

Stephen Greenhalgh, deputy mayor for policing and crime in London said: “We’re seeing this in football matches, and the police are not doing routine stewarding, and nor should they. The clubs are organising the stewarding when you go to the Tube stations.

“The police will maintain public safety, they are not there to steward protests or football matches.

“Police are there to keep the public safe. If you want to make a march or a protest, or you are making a statement, of course the police will do their bit to ensure that people can make their voice heard. What they are not there to do is basic stewarding or traffic management.”

Commander Peter Terry from the specialist crime & operations unit said: “For over a year now the MPS has been trying to get London football clubs to sign the Special Police Services Agreement which was drawn up to ensure football clubs bear the cost and any liability incurred for officers provided to police their football matches.

“This follows a lengthy process of engagement with the clubs to discuss our position and give them ample opportunity to raise any concerns they might have.

“Some clubs have already signed up to the agreement, however a large number have not yet signed and the new football season is fast approaching.

“It is important, particularly in this time of austerity, that we get the best deal for Londoners, and that means looking at costs and where people can be most effective.

“Historically, officers from across London have been taken out of their boroughs to support policing at football matches, often many miles away from their local communities. Those officers would be better placed within their own wards and neighbourhoods to support local policing needs.

“Then of course, there is the cost to the public purse. For years the cost of policing football matches has far outweighed the sum police have been able to recover. In fact over the last three seasons policing for football matches has cost around £17.5 million and the MPS has only been able to recover around £7.5 million from the clubs.”
Arsenal declined to comment on the situation.

Everton have been put off Celtic defender Virgil van Dijk in the January transfer window, after it was revealed that the Scottish club are not willing to part with their star player for anything less than £10 million, according to the Daily Express.

This could allow Manchester United to swoop for the elegant defender, who the Old Trafford club have been repeatedly linked with a move for.

They are joined by the likes of Arsenal, Liverpool, Tottenham Hotspur, Southampton, Sunderland, West Bromwich Albion and Newcastle United in having an interest in signing him.

Everton’s opposition to the staggering fee can be seen by the fact that they have cancelled discussions with Celtic over signing him.

While this puts the larger clubs in the Premier League in the driving seat to bring him in, there is a belief that no one interested will be willing to front the huge sum that Celtic have requested for an integral player.

Everton boss Roberto Martinez has confirmed that the Toffees are looking to bring a new goalkeeper to the club in January in the wake of the injury suffered by Tim Howard, as reported by the Daily Star.

The American international has been ruled out for the next five weeks after suffering a calf injury, meaning that the club are without a top class goalkeeper.

Tonight’s game against West Ham United in the FA Cup will see Martinez put his faith in Joel Robles again, but the ‘keeper has failed to impress during the opportunities that the Spanish manager has given him in the past.

While there are two young options available to him in the form of Jindrich Stanek and Russell Griffiths, Martinez does not want to throw either of them in, and believing his side to be short, he’s looking for a permanent, long-term addition.

It remains to be seen who that might be, although he does seem to have a few players in mind.

“Obviously Tim Howard is out for a while and we are a little bit exposed,” Martinez said.

“If we could bring in a goalkeeper it would be a long-term aspect.

“We need to be relying on experienced hands. There are a couple of options that could fit in well, but I won’t bring someone in for the sake of it.

“They need to fit in well with the way we want to play. I would rather make it as a long-term signing because we only have Tim and Joel.

“The other two young players have terrific potential but it wouldn’t be positive to put them in at the moment.”