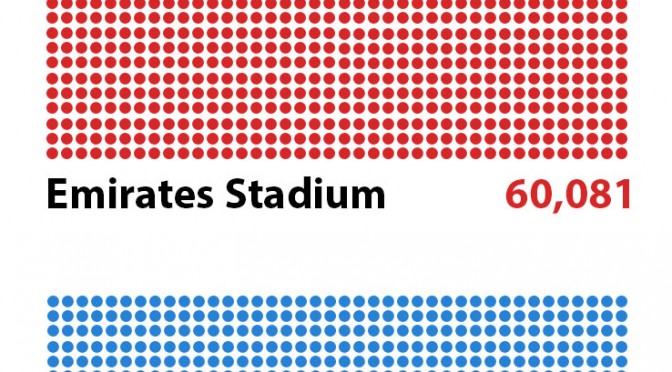 In some quarters, this weekend’s FA Cup semi-final between Reading and Arsenal is being billed as your proverbial David and Goliath encounter.

That might seem a little over the top. Arsenal’s preening millionaires will not exactly be meeting a bunch of part-time postmen. The Royals are only one division below the favourites, having only lost their top-flight status two years ago. They also have a canny manager in Steve Clarke, who’s worked with some of the country’s biggest clubs.

However, even a well-established club like Reading can pale in comparison to a money-spinning megalith like the Gunners, who are not only of English football’s most storied sides, but also one its richest.

Here are some visual representations of just how huge the gap is between the two sides. 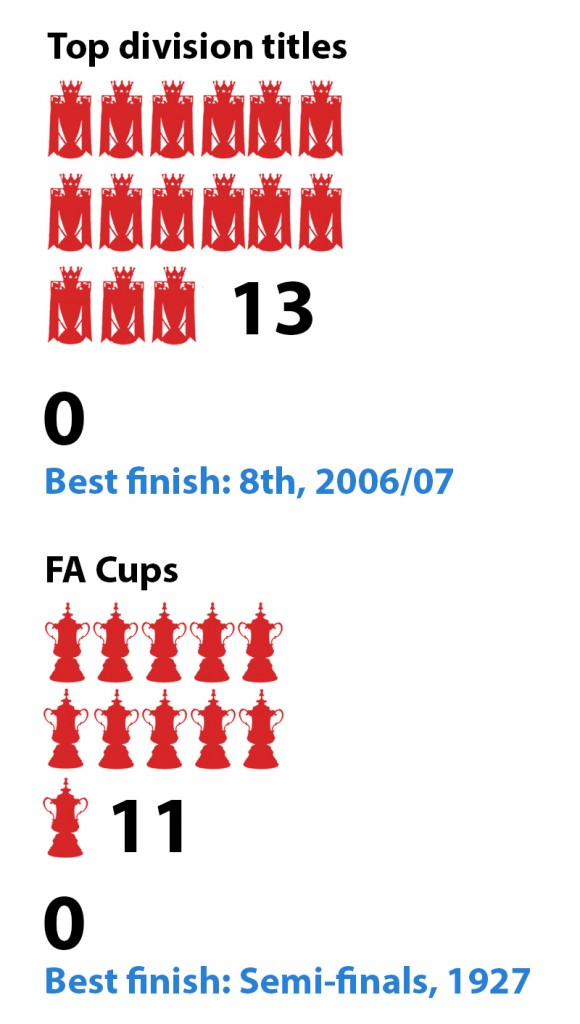 Whereas Arsenal’s all-time haul of competitive honours makes them the country’s third-most successful club of all time, Reading are some way off that mark.

The Royals’ semi-final appearance this weeekend will equal their best ever finish in the competition, which came all the way back in 1927. 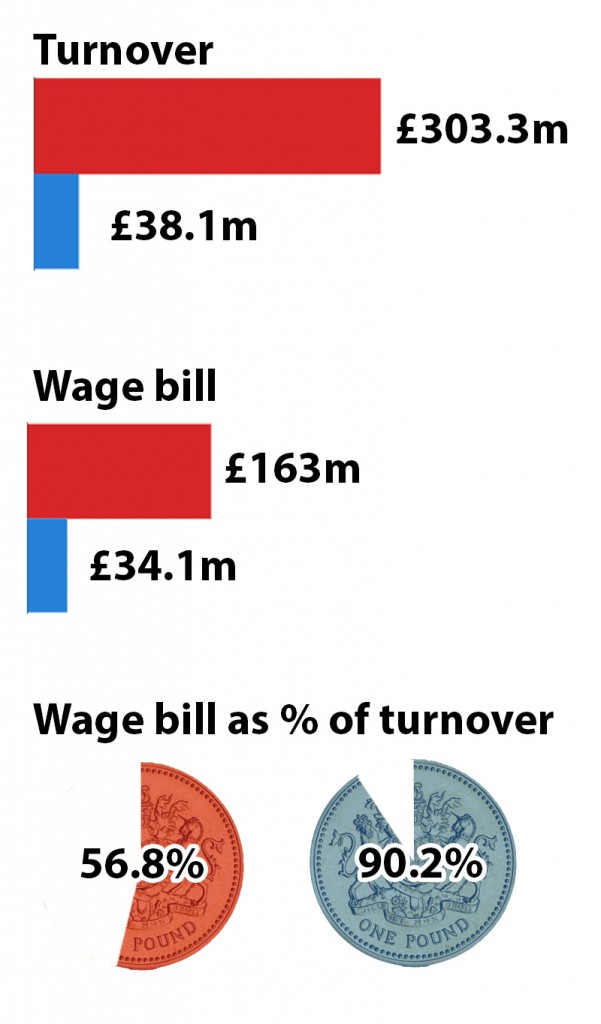 Arsenal’s income stood at £303.3m last season, more than any other English club. This allows them to spend a staggering £163m on wages every year without a sweat.

Reading, meanwhile, can claim to have financial figure larger than their semi-finals rivals. It’s not one they want. The management at the Madjeski Stadium spend a worrying 90.2 per cent of their income on wages, something that they should seek to correct sooner rather than later.

Arsenal broke their transfer record two years ago when Mesut Özil joined the club for £42.5m from Real Madrid and went close again the following summer, when they shelled out £31.7m for Alexis Sanchez.

Reading, on the other hand, can’t quite compete. Their transfer record stands at £3m, following the signing of Jamaican international Adrian Mariappa from Watford in 2012. 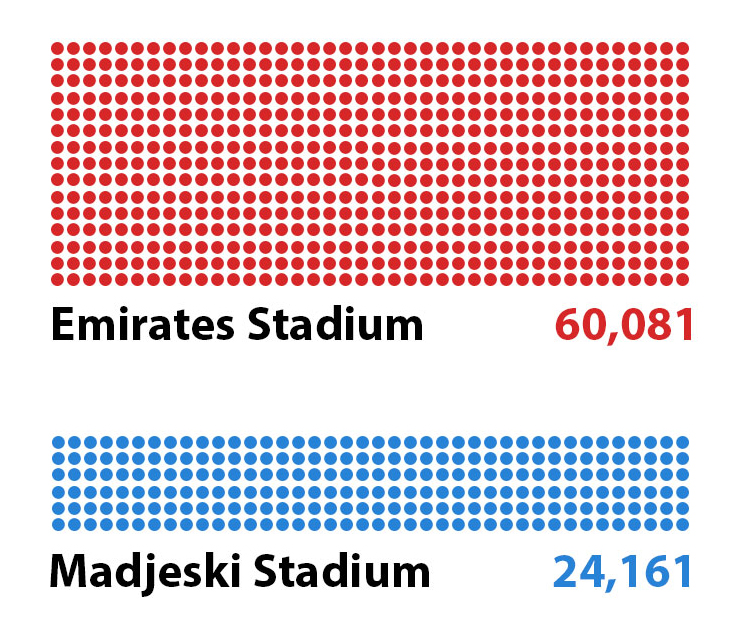 Both clubs have moved into ultra-modern stadiums in the recent past. Reading moved into the Madjeski Stadium, named after their owner John, by their owner John, in 1998. The ground is shared with London Irish, who the football club earn around £600,000 in commission from every year.

Arsenal’s protracted move from Highbury to the Emirates was undoubtedly worth the wait. The stadium has taken the club to the next level and established them at European football’s top table. Attendances are never too far off the capacity of 60,272, which is the second biggest in the league behind Old Trafford. 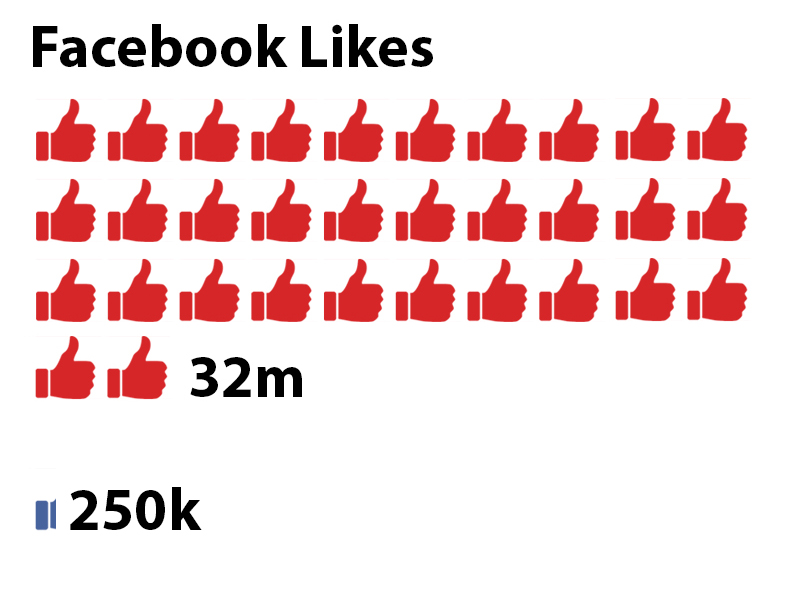 Arsenal can boast a huge following on Facebook, with around 35m fans having ‘liked’ the club online. The Gunners will, however, want to bring a few more of these fans onto Twitter, where they have only 5m followers.

Reading, meanwhile, are doing relatively well. Their 250,000 likes are backed up by a 150,000 followers, suggesting a hard-core of support across both social networks.

Arsenal defender Per Mertesacker has revealed his humble road to stardom, one which saw him fly under the radar for a considerable spell prior to making it in professional football, as reported by Arsenal.com.

He believes that it is that grounded beginning to his career that has allowed him to reach the top level of the game, something he has achieved.

Mertesacker famously won the World Cup in Brazil this summer with the German national side, showing his standing in world football.

He began his career after developing at Hannover 96, making his first team debut for the side at the age of 19.

Despite spending much of his time studying while he was first playing football, he believes he held a subconscious self belief that stood him in good stead when the opportunity to play in the first team arrived at his doorstep, after a series of injuries to his teammates at Hannover.

He said: “I was not the big talent, so I kept football as a hobby.

“The motivation was always to be fit and involved in a team, and not more – not to be a professional one day, not to be that keen on doing well every day.

“It was more fun for me, and that was good for me. It kept me grounded and very quiet.

“That was very good for me. I stayed quiet and waited for the right moment, when I was 17 or 18.

“It’s all about opportunities and a bit of luck. It went so well for me.

“I needed a few injuries to some senior players to get to my first pre-season in the first team, and then some game time that was broadcasted on television. I did well then.

“You have to take that opportunity. It’s not only to get that, it’s to take it as well and perform solidly.

“That’s the key at that stage. I told myself it was now or never and I decided to take [the chance]. I could never predict that so many highlights would follow.”

AC Milan forward M’Baye Niang is hopeful of making a move to Newcastle United this month, turning down possible switches to Arsenal and Chelsea in the process, as reported by the Daily Express.

Both London clubs have been watching over Niang’s progress over the last few seasons.

While the 20 year old was at Caen, the duo both had bids turned down for him.

Niang’s agent met with Milan director Adriano Galliani yesterday to discuss his future at the club, and the Rossoneri are open to letting him move.

This has alerted both Arsenal and Chelsea to his availability, but reports in Italy suggest that Niang is set to move to north east giants Newcastle United.

The fact that the French under 21 international could join a number of compatriots at St James’ Park is said to have made a significant difference to his decision over which Premier League side to join.