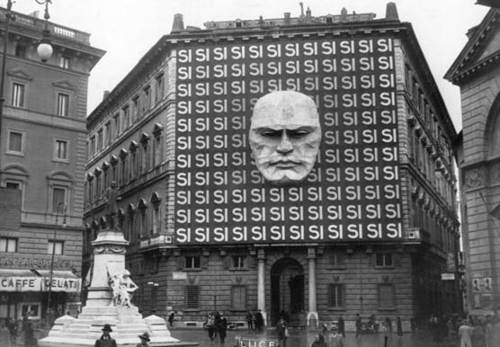 Good for you Paulo.

Back in 2005, before Di Canio went on his very obvious public relations tour of the UK’s media, counteracting a spell at Lazio before taking on his first managerial position, Di Canio uttered the words that you can see above. He is not a racist, he hastily says, but merely a man who adores Mussolini, who allied with Hitler, who stripped the rights of the individual from his people, who helped plunge the world into war and led to the untimely and massively unfortunate deaths of millions in a fight to protect the freedoms of the people of Europe. So really, Paulo, you’re just openly supporting your dictators of this world, those who ruin the lives of those they rule over, not any genocides they may carry out. Good for you.

The problem in criticising managers of a staunch anti-individualist political bent is that they can often think about the collective, which is quite useful tactically. Di Canio’s politics are the same. Valery Lobanovsky was the generator of total football in Eastern Europe, and part of this can be credited to his staunch beliefs in Communism. His love of the collective, the need for the team to perform above the individuals, explains his successes. Di Canio’s lack of tolerance of players who have questioned him likely comes from the same segment of political thought, except on the other side of the political spectrum. After all, it has been said that the spectrum is more often a toilet. For this reason, Di Canio could quite easily find himself achieving.

Up front, I’m a left-leaning person who finds Labour far too central for my liking. I’m also Jewish, so it would be very odd to find me agreeing with anyone who idolises Mussolini. However, I have become increasingly convinced over the last few weeks that I would have been incredibly disappointed with Di Canio taking over at Leeds United. I saw it as too much of a risk to appoint him, not just for his political leaning, but also for what he has achieved and how he has achieved it. A step into the Premier League is even more of a risk.

Yes he took Swindon up, and guided them into a great position in League One. However, there was clause after clause in his contract that meant Swindon were obligated to bring in talent above and beyond their means. He left them in a financial lurch, on the cusp of administration if they hadn’t found new ownership.

He’s also known as a fire-brand, and people wanted to bring him in at Leeds due to the notion that he’d get the players motivated. I’ve become increasingly convinced that this isn’t enough anymore. Tactics are the name of the game, and it is imperative that a coach has both that and serviceable man management in his locker. Look at Villas-Boas, who was criticised for his lack of man management last season. The players at Spurs all love him now, and what did it take? A single move out of the Mourinho locker – sending texts out to players asking how they were doing, which Ibrahimovic said Jose did when he was at Inter, and Spurs players have hinted at. That is all that is needed this day – players have too much power to be harangued by someone shouting at them or taking them on trips to Cornwall, especially in the Premier League.

Di Canio is the wrong appointment politically, and I praise David Milliband for resigning and not taking the easy route of being political about it. He’s probably not going to be a massive improvement on O’Neill, who at one point could motivate players to run through brick walls for him, but was completely caught out tactically over and over in his time at Sunderland. Football requires more these days, and I’m not convinced Di Canio has it.