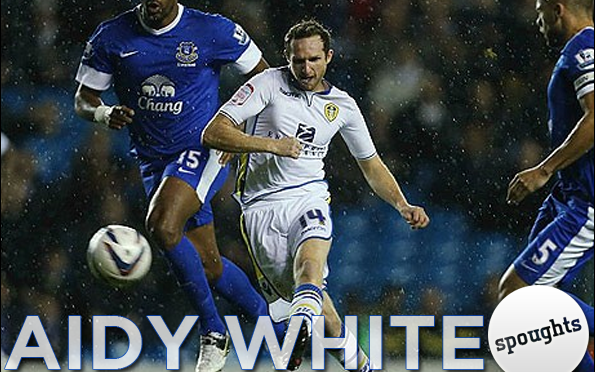 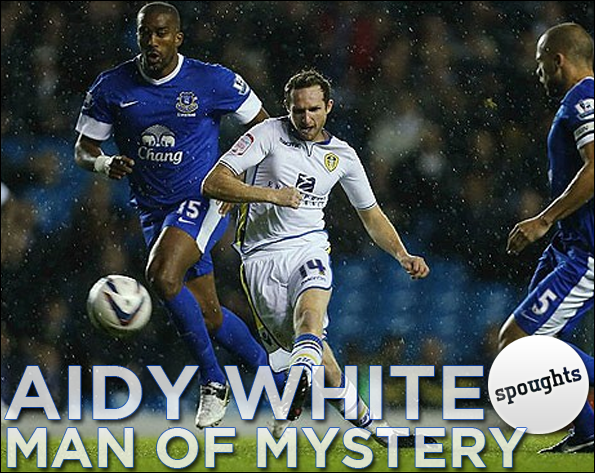 Four minutes. Four minutes was all it took for Aidy White to show his ability as a footballer on a larger stage than any he has been afforded so far for Leeds. Live on Sky Sports, Aidy White beat Premier League stars and completely befuddled a man who has been one of the shining lights of an Everton side with great momentum behind it. He then finished with aplomb, a word never used in a context other than a golazo, and peeled off, seemingly utterly confused with what had just occurred. Leeds had just taken the lead against the team third in the Premier League, and Aidy White’s emotion was spread all around. What had just occurred? Aidy White? Really?

You see, Aidy White doesn’t do this. He’s threatened to come good for around two seasons now, with issue after issue arising that has held him back. First it was cramp. Then Grayson seemed loath to blood youngsters with a potential play-off campaign afoot. He was shipped out on loan and returned. Finally, when he was settling into the left-back berth and actually performing to a level that had larger clubs sniffing, a new manager arrived and moved him to the right side of midfield. Suddenly, his contract was nearly up (we’re talking months here, a time after which Leeds players never usually re-sign) and injury struck. We thought we’d seen the end of him. Then he appeared out of nowhere in pre-season, and was given a contract (word that investment from elsewhere paid for this abounds). Warnock was clearly keen to sign him up. The season began, and, to be honest, nobody was really sure why.

At one point I was tempted to post up that I really rate Aidy White, but I’m not entirely sure what he does. He was a great left-back for the first half of last season (genuinely, aside from some mistakes that come with experience), and I felt that the attempt to convert him into a proper winger by Warnock had just hampered him. The only clip I saw of him in pre-season training was scoring goals, coming in from the right onto his left. Then the season began, Adam Drury got injured and White had to cover at left-back. He was suddenly useless. I was loath to criticise him, as he has been shunted about positionally for a couple of years on the bounce. Warnock was clearly building him up to play on the right – he needed a chance.

He took it last night. The goal was exactly what you’d hope for from a pacey player that is expected to cut inside. It got me thinking. The same Aidy White who struggles to make it to the touchline might be ideally suited to this role. Instead of having to deal with a full-back, trained from a young age to play the same game as him, White can run at the slow, lumbering centre backs that make up defences in this league, forcing them to turn and twist in an attempt to close down the channels that he can run through. Sylvain Distin, a far superior player to those who White will have to face weekly, couldn’t close down the gaps quickly enough.

White playing on the right also gives Byram the ability to bomb on from right-back. He can overlap without any concern for defensive frailty as White can fill in behind. Similarly, this allows Diouf to float out to the wing, where he has been a constant menace this season. Oddly enough, White has even shown at times a willingness to use his right boot. Not to criticise Robert Snodgrass, a reasonably one-paced player but still the best we’ve had over the last few years, and a real loss to the time, but his reliance on his left foot alone is nearing farcical levels. White put balls into the box in his short cameo against Forest at the weekend, using his right boot.

I’m not suggesting that one performance alone should cause levels of confidence we’ve never had before. He needs to do it consistently. But yesterday White showed that maybe his time as the man of mystery, a man of many positions and yet none, might finally be over. He’s captain of Ireland’s Under-21 team. The potential is there. Do what he did last night weekly and our man of potential will become a man of ability. Best of all? He just signed a new deal.

One thought on “Aidy White: Man of Mystery”