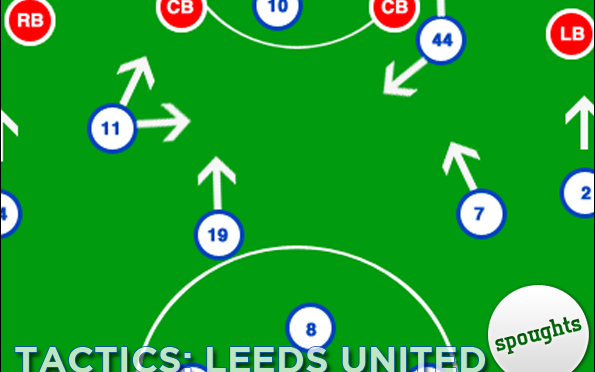 To look at Neil Warnock and his teams, only one phrase comes to mind. ‘Long ball’. The hoof. The end of last season put into perspective the quality of football we had enjoyed at times under Grayson. The unbeaten streak during our first season in the Championship was, at times, excellent to watch, and Warnock’s supposed tactical beliefs made me incredibly concerned for the future.

However, from what I saw last week against Shrewsbury, Warnock seems to have, through imprinting his own ideas on the transfer market, made it possible to play a direct game that might actually be entertaining. 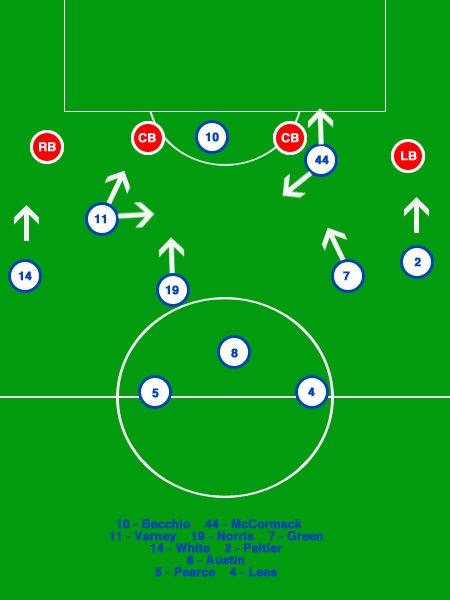 Take his selections on the wings. Varney and Green both seem incredibly unlikely to beat, or even attempt to beat their full-back during a game. Warnock seems interested in bringing in a right sided player, but I’d be tempted to argue that Green will still start, given that he’s a Warnock signing and fits a role that I will describe below. The dynamic player might just fill the role Diouf currently seems to be intended for – an off-the-bench impact player who does not, and should not start off the match.

The way to think of Green is not as a winger. Green is very much a third central midfielder who operates wide. His duty is that of a central midfielder, to break up play, to create new movements on the shift of possession. He will likely float around the same starting lines on the pitch as Norris, with Austin sitting deeper, but rather than operating through the middle, he is to sit out wide. This provides a solidity that Warnock will crave – it basically provides the benefit of a central midfield three without taking away the natural wide play of a midfield four.

On the other hand, Varney, whilst still constrained by a lack of interest in beating his full back, will fulfill a completely different duty. Firstly, he seems naturally inclined to cut inside and float around the final section of the pitch. In fact, the only cross I can remember of his against Shrewsbury, which confused the defence and allowed Becchio a relatively free header he probably should have scored, came from the right wing. Varney also was the target for balls from the back, given his height and aerial prowess. This allows a shift in the direct ball should a large center back have the better of Becchio. Given the relative weakness of most full backs in the air, this will also probably cause a manager to move a central defender to mark Varney in the event of these failures. Were we playing a flat system with a single striker, this would have little benefit.

However, McCormack, operating in the position he always should have been, essentially free to choose between midfield and attack as he desires, will then become a greater threat. The missing center back means McCormack will not be muscled off the ball – he can run at the defence and cause havoc, taking long shots which he has a proven aptitude for. With the stretched back four, McCormack’s excellent positioning and ability when running the line of a defence will also come to the fore. People have questioned where the creative force will come from next year, and whilst I would enjoy the signing of someone with the express duty of providing this, McCormack can fulfill that role.

There was an oft repeated move in the last game where McCormack would gather the ball, run at a defence that was dealing with the threat of Varney from the left, knowing it is necessary to cover this. However, rather than going down this route, Paul Green would run from the right midfield position, moving inside like an attacking central midfielder, and dash past the defensive line as McCormack played the ball over the top. It occurred two or three times and lead to the penalty. It is obviously a set move that is a work in progress, but if they crack it, it could become incredibly dangerous.

Before I cover even further why this isn’t possible to defend against easily, there are two final pieces to the attacking puzzle. David Norris is the most obvious one. Genuinely considered by some to be the midfielder with the best timing of runs in the Football League, Norris proved his ability to arrive at the correct moment with Varney’s knockdown that led to the third goal. In fact, this was the second time he pulled the run off perfectly, and he probably should have done better with his first opportunity.

Secondly, the full backs are of note. Both Peltier and White have the potential to be crossing threats in the final third, especially with Green and Varney both naturally drifting inside. Pearce and Lees, with Austin sat in front of them, are likely a solid enough back three to deal with counter attacks and breaks, especially with White’s rapid pace allowing him to get back and cover if necessary. This allows them to push up when attacking, overlapping the ostensible actual wide players. I am a huge fan of this – with both pushing down the wings, it becomes difficult for a defence to maintain shape and requires the involvement of their midfield to cover for the additional players. Many times, teams are not disciplined enough to ensure this occurs. This means crosses from the left and right can be aimed for Becchio, who is a great one-touch converter of the ball when on form, and with Warnock drilling the skills into him, he should have a good season in front of goal.

Going back to the movement therefore, with McCormack dropping deep, he has a wealth of options ahead of him. Green can run inside, and the defence cannot cover for it – a center back will be occupied by Becchio, full backs need to cover for Varney and the right back respectively, one center back will probably deal with McCormack or offer additional cover for Varney, Norris needs to be controlled by the central midfield pair, given his runs, or he will pounce on any knockdowns. Our full backs will provide the width for crosses, whilst Varney will also attempt to get on to these and help out Becchio. Without sacrificing solidity, Leeds will genuinely have around seven attackers in an attacking phase of play, with the additional ability to counteract counter attacks. In defensive movements, our additional ‘central midfielder’ will stop the years of being overrun in the center of the park.

I hope this is all understandable, but watching Leeds last week gave me hope. Whilst we seemed neutered in attack last season, there is likely enough in the way of movement to allow us to create goals. Warnock has, with his ability to maneuver in the market, probably created a team with the right amount of attack and defence. This bodes well.

Follow Amitai Winehouse on Twitter (@awinehouse1) to read other pieces analysing tactics in a team without tactics.