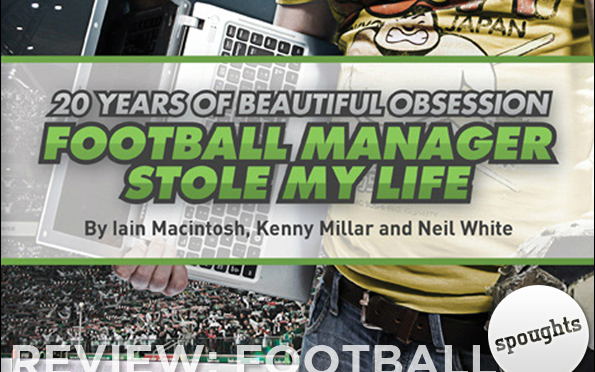 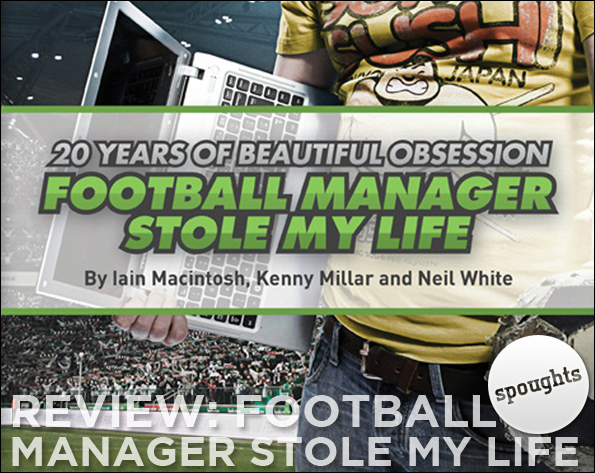 There was a moment yesterday when I had to mentally restrain myself from reinstalling Championship Manager 01/02. I’m not sure whether it was being reminded of David O’Leary’s propensity to take the Manchester United job or the constant mentions of Tonton Zola Moukoko that are contained within Football Manager Stole My Life from Backpage Press. I’m not sure how long the restraint will hold. Championship/Football Manager is arguably my favourite thing of all time.

As an ode to the aforementioned series, therefore, Football Manager Stole My Life (FMSML) is an immensely appealing endeavour. To this haplessly addicted fan, the book’s arrival in the post was an exciting moment. The initial inspection of the book, my sensual grappling with the front cover, revealed some surprising things. It is not the size of a normal book, and flicking through, is clearly presented like an overly long magazine. Freight Design have done an excellent job with the layout, even to this critical eye. Everything is clear and easy to read, and the allusion to the green of a football pitch throughout is a nice touch. The only minor criticism in this regard that can be made is about the usage of black and white images, but this is incredibly minor.

Aside from the aesthetic aspects of the book, FMSML is an immensely readable piece of non-fiction that should be appealing to those who are well acquainted with Sports Interactive’s series.

Earlier this summer, my football club was linked with Freddy Adu, the suggestion being that we had him on trial. It immediately brought back memories of trying to bring him to the club at the age of fourteen on Championship Manager 2003/04. The difficulties of doing so were myriad – age, work permits and the rest all hindered his move to England. The reality was, however, that everyone said he was “worth it”. Discussions between fellow enthusiasts always brought his name up. It brought some joy, therefore, to find out that Freddy Adu is “aware” of his history with the series.

The segment that involves them catching up with Tonton and other stars of games past is therefore of interest, even just as a reminder of those who have come before. In fact, it brings an excellent comparison to the earlier segment where the various researchers point out their successes in calling future stars of the actual sport. The arrival of “Luis Leonardo Messi” in the database in 2004 is heralded as a moment of excellence within the book. It is of note that he had done little prior to this point, yet was still granted the highest potential ability. I’ve often queried how the researchers get the future of football so right, so to hear from them about their processes is interesting. The reality is, however, that actual football sometimes contrasts heavily with the simulated world of Sports Interactive’s making. The same researcher, Ivan Abella Villar, said that Oskitz Estefania of Real Sociedad should have been a player of the same level, yet injuries and the like stopped that dream short. The contrasting successes of these two players, both introduced to the game in the same year, is just one example of how FMSML goes to lengths throughout the book to symbolise the fact that Football Manager manages to live in this bizarre world halfway between reality and fiction. Whilst it seems ridiculous that dots on the screen can quickly translate into full-blown opinions on actual footballers, stories told within the book show the occasional benefit. Tales are told about jobs acquired due to the knowledge of football gathered from the game. Football Manager is shown to be a tool for many in important roles, and aside from being fascinating, it also gives justification to anyone arguing for the need to click continue one more time before bed.

The written highlight of the book comes in the form of The Heidenheim Chronicles, written by Iain Macintosh. The tale of a manager in charge of the worst professional club in Germany, it would probably not be wrong to suggest that the emotions displayed within are Macintosh’s actual reaction to a game of Football Manager gone hilariously awry. Macintosh is clearly a long running player of the game, and with that breeds an expectation of success. The reality of my saved games in recent years is a feeling of being a managerial prodigy dropped into the footballing world. Gone are the days of yore where I felt constantly on a knife’s edge, between acceptable performance, and outright failure and sacking. Macintosh’s writing, which is absolutely excellent, draws incredible amounts of sympathy. There is literally nothing he can do. I’ve made my mistakes on recent versions, such as stupidly taking on the Australia job, where no success can be had. This is soul-destroying. As Macintosh himself explores through an interview with a psychiatrist elsewhere in the book, Football Manager is a world one can escape into and have complete “control”. This goes for everything from tactics to signings. Success usually follows. Heidenheim therefore symbolises perfectly what happens when things do not go right. It is an experience like no other. Madness generally follows. Insane tactics. Heidenheim should therefore be read by all fans of the game. It shows that we are not alone in our instinctive reactions to a bad run. A failed game can be more painful than anything. As a piece of fiction, all Football Manager addicts need to read this, incredible sympathy will be evoked. This snippet of text suggests that the great Football Manager novel should yet be written.

The exploration of Football Manager’s beginnings is interesting, if not a tad confusing for those of us who are less acquainted with the names behind the game. It is also heartening to gain an excuse as to why purchasing every year’s edition of Football Manager is worth my time, as it provides benefits to organisations that deserve it. Furthermore, the segment about extreme habits provides some solace – I’m not the worst player on the planet. I have never gone on an open bus tour to celebrate a cup victory. However, I am mildly tempted to start emulating conditions for those tricky away European ties. Whilst the book suggests setting a wastepaper bin on fire to create an atmosphere akin to those travels to Turkey, I’m more interested in somehow making matches in Eastern Europe seem more difficult due to the inclement weather – after all, I am the sort of person who suggests getting Zenit and Sparta Prague in the group stages is a tough draw. The reality is that for a player of the game, there are enough moments and narrative beats that evoke thoughts and memories to make it a worthwhile purchase. If you’re considering purchasing it for yourself, consider no more. You will enjoy it, guaranteed.

The real question is the enjoyment non-players could glean from it. The stories of slightly insane players can still entertain someone who is not a fan, as demonstrated by my reading of them out to those in the vicinity to laughter, but this alone does not make up the book. The player profiles and the other referential items that make up a vast majority of the book would be lost on the average reader. Who is Nil Lamptey to them and what do they care? Why would learning about the environment in which the game was created (seemingly the same as that in which the game is often played) be of interest to them? The reality is, sadly, the book will be primarily read and enjoyed by fans of the game. This is not to say it will be niche – the majority of football fans I interact with are at least somewhat acquainted with FM. It merely means that before purchasing the book for a loved one, ensure they have an addictedness rating of at least “remember to call your work and ask for more sick leave”. You’ll probably already know.

Purchase Football Manager Stole My Life from Amazon for £9.09

Follow Amitai Winehouse on Twitter (@awinehouse1) to be repeatedly jabbed with a large ‘read me now’ stick whenever a new article goes up.