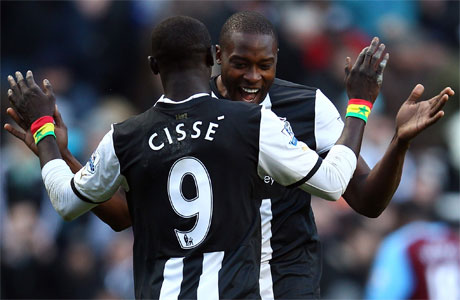 When Shola Ameobi said in April last year that he still dreamed of playing Champions League football with Newcastle, reactions ranged from bemusement to outright howls of derision from some quarters. A topsy turvy summer followed, which saw the arrivals of classy french midfielder Yohan Cabaye from Ligue 1 champions Lille and powerful striker Demba Ba on a free transfer; but the departure of the influential trio of Kevin Nolan, Joey Barton and Jose Enrique – all 3 of them star performers in the club’s first season back in the premiership. Enrique left with the claim that the club would never again challenge for the top 6, a remark that many experts saw no reason to disagree with. Indeed some pundits, perhaps accustomed to the apparent tradition of self destruction at the club, predicted a struggle against relegation for the coming season. Ameobi’s dream of Champions League football seemed to be pure fantasy.

12 months on from Shola’s derided claim and only goal difference separates the Toon from returning to Europe’s elite competition. An already stellar season – one that has seen a demolition of the champions, an 11 game unbeaten run and not one but twoof the best individual goals seen at St James’ in recent years – could now be capped with what is, aside from winning the league, the ultimate aim of all teams in the division. The heroes of last season may have departed, but new figures have emerged. Ryan Taylor earned cult status after only two games with his freekick against Sunderland. Yohan Cabaye has given the side a touch of genuine class and formed one of the most formidable midfield partnerships in the league alongside Ivorian enforcer Cheik Tiote. Goal machine Demba Ba was at one point the most prolific striker in the league, his 16 goals propelling the team up the division. As a result of the early season performances of these players, United have occupied the European places for the majority of the season. Yet it is only recently that people have truly begun to believe that Champions League football could be a reality, that Shola’s vision could indeed be realised, only one year on.

This is a result of a sensational run of form that has seen the club win its last 5 league games – a run currently only bettered by Barcelona and Ajax in Europe’s top leagues. While injury and fatigue have understandably begun to affect some of the early season performers, others have exploded into life. Hatem Ben Arfa was used sparingly by manager Alan Pardew at the start of the season as he returned to fitness after a year out through injury, and as he adapted to the defensive responsibilities he was expected to fulfill without the ball. As a result he now looks fresh and back to his dazzling best, scoring and creating in equal measure, most recently running 70 yards with the ball to score against Bolton. In January signing Papiss Cisse, Newcastle possess the most prolific striker in Europe at the moment, the Senegalese hitman averaging a goal every 68 minutes. They certainly seem to have the attack to fire them into the Champions League, but it is also worth noting that the Magpies have only conceded one goal on their current winning run, something that may please Pardew even more than their prolific goalscoring form.

Newcastle face a tough final run in: the always difficult Stoke, in form relegation battlers Wigan, rivals for 4th place Chelsea, mega rich Manchester City and FA Cup semi finalists Everton. However, if they can maintain their current form there is no reason that the Toon can’t pick up enough points from these games to take fourth place – particularly as rivals Spurs and Chelsea may be distracted by cup competitions. With Europa League qualification seemingly in the bag, bar a complete disaster, the team can attack these final five games knowing that the pressure is off. Certainly the fact that this is even a possibility is beyond the wildest dreams of even the most optimistic Newcastle supporter going into the season. As the apparent experts keep telling us, ‘no one could have predicted this’. No one that is, except Shola Ameobi.