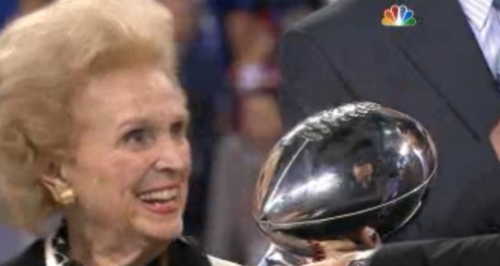 There was a point, in the early hours of Monday morning, sometime after my last wing and just before the broadcast finished, that I began laughing. I began to imagine the next ridiculous moment that could occur, completely contrary to my previous experiences of sporting events, and lo and behold, the television would provide. From ridiculous endorsements to the unbelievable manner in which the trophy was handed over, the Superbowl was a series of baffling experiences. Sharing my thoughts with fellow writer Philip Buckingham, it soon became clear as the match progressed that watching this match was akin to watching a Martian broadcast for the two of us. Comparisons with the FA Cup final became prevalent. Two young men talking about our fears for the future of football. What follows is a comprehensive list of the more ridiculous features of the Superbowl.

The Constant Endorsements and Advertising

You’re watching the half-time show sponsored by Bridgestone tires. You’re watching the punditry sponsored by the Whopper. Finally, the match ends, and you’re watching the MVP presentation, sponsored, endorsed and with prize provided by Chevrolet. Already following the first fit of laughter, the manner in which the camera panned slowly to the Chevrolet as Eli Manning was announced as Most Valuable Player was shocking enough. I then made a mocking comment as to how they could announce the Chevrolet sponsored MVP award, but what occurred was even better. Without missing a beat, the interviewer told Manning that despite the fact he had flown to the game, he was going home in a brand-new Chevy, provided kindly by ‘The Chevrolet Corporation’. It was not enough to feature the logo of this brand in one of the closing shots of the presentation, but also to point out that, intrinsically, the game’s best player is Chevrolet related. This is worthy of mockery, but there are clearly reasonable fears that the same issues can occur in football. Simply looking at a website like The State of the Game can reveal the ridiculous endorsements that have cropped up in the ‘beautiful game’. In the realm of cars alone, Alex Ferguson, staunch socialist, and his ringing endorsement of Audi is a sign of things to come.

“They’re not going to hand the trophy over to the old woman”. But they did. Then they asked the owners gathered on the platform how they managed to achieve this victory. All the while, the players who had just performed in the match and won the trophy got a fleeting glimpse and touch as it passed them by. To top the entire incident off, they asked the ownership group how they achieved the spectacular victory, and they had the gall to respond in any manner other than “we sat and watched the people we appointed”.

This is akin to Manchester United winning the FA Cup, and the trophy bypassing the entire team, including the winning goalscorer, in order to be handed to the Glazer family. Gabriel Clarke then saunters over to them, and asks them how they achieved this victory.

“Well, what we did is took one of the world’s most profitable football clubs, and plunged them into hundreds of millions of pounds of debt,” reply the Glazers, beaming all the while, “and following this, we signed endorsement deals with all and sundry, allowing us to turn a profit whilst simultaneously servicing the mountain of interest that needs to be dealt with annually. Then, incidentally, we had a decent manager and some players, but they aren’t important.”

The day when a chairman gets handed the League Cup after a their team’s victory, rather than just placing a medal around the manager’s neck, is the day that football dies.

American Football is a series of set-pieces

People often mock Stoke City by saying they play a particularly attractive brand of rugby. The reality is they do not, but parachute that team out to America, double it, and they may just be able to play the national sport. It is odd to have that much downtime in a sporting event, and you come to realise, when watching it, that the entire matter is built around well-practiced runs and plays that involve little or no personal ingenuity. That is not to say that these men should not be considered impressive athletes, but it does explain why the sport is impenetrable for many in the UK. If a player does not follow the paths laid out for him, he will find himself unreachable by the Quarterback. It is hard to imagine all of Gareth Bale’s runs being plotted by Redknapp in advance and it may just be this contrast we find most baffling of all.