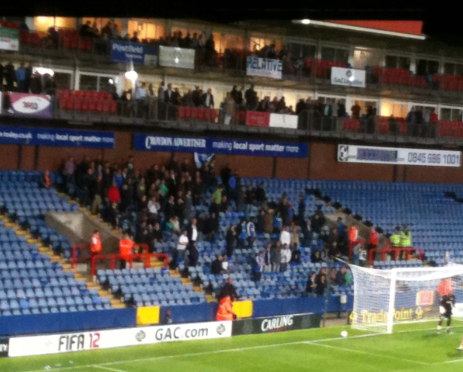 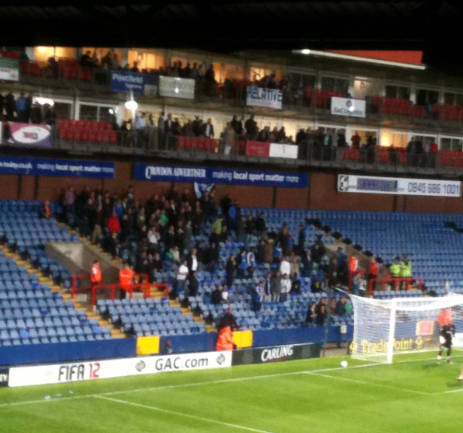 Every fan remembers their first away day. I was part of the first generation to grow up away from the terraces, and instead experience the comforts of the all-seater stadium with its ample legroom and aesthetically pleasing surroundings. You can imagine then how much of a culture shock it was when I went to my first ever away game in the late 90’s – an F.A. Cup game at Wrexham’s Racecourse Ground.

The first thing I remember thinking was – let’s be honest – this place is a dump. Following the considerable commute to North Wales I decided to visit the toilets. However rather than being confronted by a row of glistening urinals and cubicles, I was met by a brick wall and the stench of urine and beer. As I sat down at my seat feeling a bit dazed and confused I realized that something else was wrong.  Where was the legroom?! The seat in front was mere inches away from my legs and the man next to me was virtually sat on my knee. However once you get over this, you begin to realize that away days are a bit different. There is a special atmosphere amongst the fans. The acoustics of a tightly packed away support in a rickety old stand behind the goal generate an atmosphere rarely paralleled at home games. For instance, old-fashioned grounds like Hillsborough, Oakwell and the City Ground are not necessarily the most pleasing on the eye but the atmosphere they create is often electric. There’s a certain something, a je ne sais quoi, in the air at away games, which is hard to describe. Whether it’s a Tuesday night away at Chesterfield in the Johnstone’s Paint Trophy with just a handful of fans or an F.A. Cup tie away at the Emirates with a travelling army, the experience is incredible.

Indeed, in my opinion some of the best away days have come at the older, more decrepit grounds, and with not necessarily the largest away followings. Travelling to a midweek game miles away from home with a group of fans who have often dedicated their entire weekly wages to follow their team, the hardcore and the lifeblood of any team, you realise those who surround you are the real diehards. If you go to enough away games you will start to recognize the same faces and distinctive shouts of ‘Get into ‘em!’. These people represent the soul of British football. These supporters would never even contemplate missing a game because it’s on television or because their team is languishing in mid-table. Obviously all clubs need casual supporters in order to flourish. This is the type of fan who goes to one or two away games for the local derbies and attends home games when the club is playing well. They provide a vital revenue stream for the club, by purchasing tickets, programmes, merchandise and so on. It is however those fans who rigidly attend away games, no matter what, who give the club its identity.

Away days are therefore something that every true football fan relishes. Sure, the food and the drink can be outrageously priced (£4 for a roast vegetable and cauliflower pie at the Emirates anyone?), and you have to pay £3 for a programme which features a usually error filled two pages on your team. Despite this, the away day is engrained in the football fans psyche and is indeed a rite of passage for all fans. The away day transcends social barriers and for 90 minutes you are among people who live and breathe football. The passion on display is startlingly refreshing in this age of Sky Sports and inflated prices. This is not to say that home games are undervalued by fans, nevertheless there is no better feeling than coming away from a rival’s ground surrounded by likeminded fans with 3 points in the bag – it even makes the arduous trek home seem bearable.